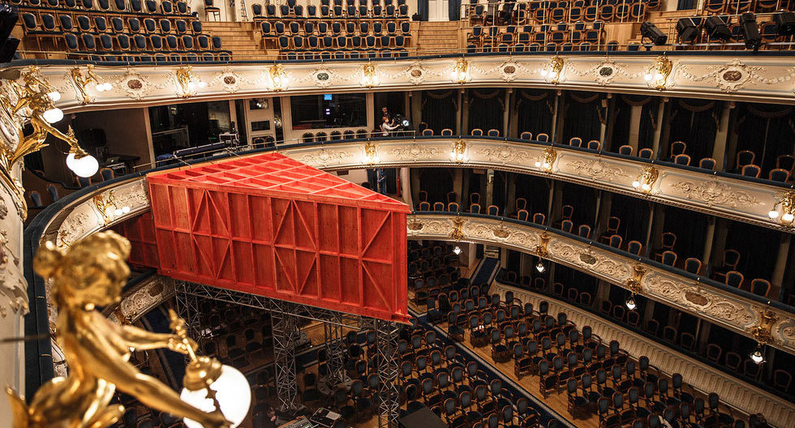 The programme will open in November with works by the famous video artist Bill Viola, known as The Rembrandt of Video Art. Audiences will see his works from the Plywood Theatre’s lodge: 'living pictures' will be projected on a large screen of the BDT Main Stage for the first time. On November 24 and 27, the theatre will screen The Quintet of the Astonished, and December 24, 27 and 29, the audiences will watch Three Women. Before each show St Petersburg art historian Gleb Ershov will offer a guided tour around the Plywood Theatre.

On December 6 and 10, the Plywood Theatre will host the premiere of Arkhitekton Theta by Boris Filanovsky, a sound sculpture for the ensemble, choir and moving listeners, composed for the BDT Plywood Theatre and commissioned by the Theatre and the PRO ARTE  Foundation. Experimenting with space, the composer created a complex sounding body with the ensemble and the choir, thus turning the architectural installation into a giant musical instrument.

The project will culminate in Jan Fabre’s festival, Love is the Power Supreme, which will be held from December 2 to 16.

On December 14, 15, and 16, the theatre will host the Russian premiere of The Night Writer, a play adaptation created specifically for the BDT Plywood Theatre and based on Fabre’s diaries. The Night Writer will be Jan Fabre’s first repertoire piece in Russia.

On December 5, 6 and 7, the BDT’s second stage (the Kamennoostrovsky Theatre) will host the world premiere of Resurrexit Cassandra*, and on December 13 and 14, the theatre’s main stage will host the performance Preparatio Mortis*.

From December 2 to 11, BDT’s Space 59 on the Fontanka embankment will host Pierre Coulibeuf’s exhibition-installation Warriors of Beauty, that aims to translate Jan Fabre’s theatre world of into the language of cinema.

The exhibition Knight of Despair / Warrior of Beauty (2016) at the State Hermitage Museum introduced Jan Fabre as a multi-genre artist to the Russian audiences. The Contemporary Art Programme at the BDT will focus on Fabre's theatrical works.

Today, the theatre enters museums, this is a trend. In our case, it is vice versa: the installation, essentially a museum object, a contemporary art object, enters the theatre. We came up with the Plywood Theatre, on the one hand, as a gesture, a metaphor for renewal, rebirth of the theatre, on the other hand, we see it as a powerful sign, a metaphor for art. Art that always breaks boundaries, provides a new, paradoxical perspective on life.

The Plywood Theatre. The Contemporary Art Programme at the BDT is a project we created together with the PRO ARTE Foundation. I think this is just the beginning of our long-term collaboration.

Plywood Theatre is a unique space that inspires experimentation: the musical sculpture by Boris Filanovsky will fill it with sound and it will host Bill Viola’s works shown on the big screen, which is an extremely rare experience.

* The performances Resurrexit Cassandra and Preparatio Mortis are supported by and are shown as part of the Theatre Olympics 2020.